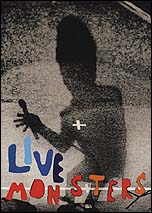 Filmed at the Olympia in Paris during the "The Paper Monsters" tour, Live Monsters captures Gahan and his band as they perform songs from his solo "Paper Monsters" album. Highlights include "I Need You", "Bottle Living" and "Hold On," plus a new acoustic version of "Dirty Sticky Floors." The DVD also includes "Live Monsters-A Short Film" that features in-depth interviews with Gahan and the rest of the band. Also on the DVD are Depeche Mode classics "Walking in My Shoes," "Personal Jesus" and "Never Let Me Down Again."