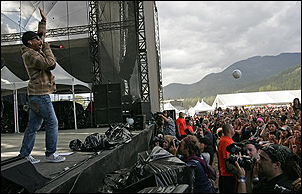 PEMBERTON, BC (CelebrityAccess MediaWire) The first year of the Pemberton festival by all-accounts was a major success, drawing a sell-out crowd of more than 40,000 fans to Pemberton Valley.

"We built a world-class music festival from scratch which attracted the world's most successful and talented artists and music fans from every corner of the globe," said Shane Bourbonnais, President of Touring and Business Development for Live Nation Canada. "The lessons we've learned as the global leader in festival production and the enormous support we received from the government and people of Pemberton all came together to create a one-of-a-kind event that we expect to produce for many years to come."

Hydro-electric energy was the main power source for the festival's energy and local Pemberton Valley farm products, which the area is well known for, were served throughout the 360 acre festival site. A farmer's market — where local farmers sold their goods directly to concert-goers – was also featured at the site. It is estimated that the festival generated more than $20 million for the local economy. – CelebrityAccess Staff Writers