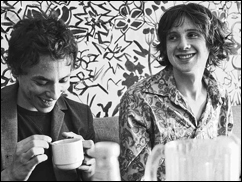 MINNEAPOLIS (CelebrityAccess MediaWire) — California-based indie rock duo Foxygen have been forced to cancel a number of upcoming dates after frontman Sam France fell off stage during performance, breaking his leg in the process.

According to City Pages, France lost his balance while standing on a stage monitor and fell into a stage barricade below while performing at Minneapolis’s First Avenue on Monday night. The band reported the details on their Facebook page:

"Sadly, the Vancouver & Seattle shows will have to be cancelled. Sam needs to have surgery this morning. We will be back. Still a chance that Pickathon shows will happen, though they might be subdued performances. It all depends on healing & travel time. On the bright side, Sam will probably have a cool cane or something. Thank you all for understanding & much love to Twin Peaks for being awesome on this short, short tour. We'll play again soon."

First formed in 2005, the group is known for their experimental sound and influences derived from the 60s psychedelic sound. They made a splash at this year's SXSW and are signed to Jagjaguwar Records and are currently touring behind their second full length album "We Are the 21st Century Ambassadors of Peace & Magic." – CelebrityAccess Staff Writers