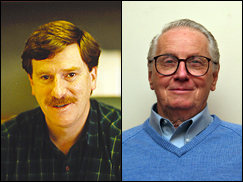 (CelebrityAccess MediaWire) — The Parnelli Awards Board of Directors has announced that PRG founder Jeremiah “Jere” Harris and sound pioneer Bill Hanley will be honored with Parnelli Awards at the sixth annual awards dinner in Las Vegas on October 20th.

Harris, who has been active in Broadway theater production since 1970 and is the founder of PRG, will receive the Lifetime Achievement Award. He has worked on over 500 major productions, including Beauty and the Beast, Starlight Express, Madame Butterfly, EFX, and many large-scale corporate events, special events, and trade shows. Harris founded the Production Resource Group in 1996.

Hanley, one of rock and roll’s most prolific and influential sound pioneers, will receive the Innovator Award. Hanley was the ears behind such landmark shows as the Woodstock and Newport Festivals, and such acts as the Beatles, CSN&Y, Velvet Underground, Jefferson Airplane and many more. He is credited with coining the term “sound reinforcement.”

“These are two giants of the live event industry, and we look forward to paying tribute to them,” Terry Lowe, Executive Director of the Parnelli Awards, said. “Both are visionaries who not only changed and shaped the way live events are produced, but more importantly, have influenced hundreds of other professionals.” –by CelebrityAccess Staff Writers