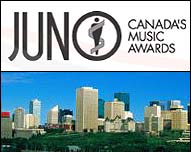 "CARAS is pleased to bring Canada's largest celebration of musical talent to western Canada this year. We look forward to Edmonton bringing a western flavour to the 2004 JUNO Awards against a backdrop of one of our country's greatest exports – Canadian music," said Ross Reynolds, chair of CARAS.

Melanie Berry, president of CARAS, says that selecting a new host city is just one of many elements that mark the expansion of the JUNO Awards. "By moving the JUNOS across the country and creating one-of-a-kind, interactive events such as JUNO Fan Fare, Songwriter's Circle and JUNOFest, the JUNOS have become more than an industry awards show – it's about connecting fans to the music," said Berry. "The JUNOS have made their mark as more than a Canadian music event – the growing attraction of international press is shaping the JUNOS as a leading entertainment event on the world-wide stage."

CARAS also has extended its broadcast deal for The JUNO Awards by two years (2004 and 2005) with CTV. "The JUNOS on CTV – it's the perfect fit. We're pleased to be able to extend our partnership with CARAS and continue to bring the country's hottest awards show to Canadians coast-to-coast," said Susanne Boyce, CTV's President of Programming and Chair of the Media Group.

Sponsors to for the 2004 JUNO Awards include FACTOR, Canadian Heritage, the City of Edmonton, the Government of Canada, the Province of Alberta and Edmonton Northlands. –by Jane Cohen and Bob Grossweiner