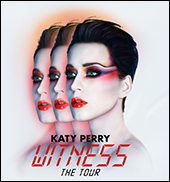 The tour had been due to kick off on Sept. 7 in Columbus, Ohio, but the run will instead get underway at Montreal’s Bell Centre on September 19th before heading south for her first show in the U.S. at Mohegan Sun Arena on Sept. 21st.

“Due to unavoidable production delays, major elements of my tour stage design could not be available for me to rehearse on until this week. I’ll be spending the next few weeks taking the time to properly prepare the show to be an experience I am proud to share with you. I’m sorry for any inconvenience this causes, but hope everyone who sees the show will agree it was worth the wait,” Perry wrote in a press release on her Instagram.

Perry also revealed that Noah Cyrus, Miley's younger sister, would be opening for her on select dates in the first part of the tour. Subsequent openers include Purity Ring and Carly Rae Jepsen.