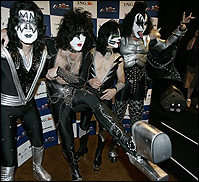 BELGRADE, Serbia(VIP NEWS) — KISS has cancelled their May 15, 2008 concert at the Tasmajdan stadium in Belgrade, Serbia.

"The agency Lupa, promoter of the concert, explained that the agent of KISS informed them about the concert cancellation, explaining that it was due to political situation, which reminded them of their previous stay in Belgrade, especially because of the forthcoming elections in Serbia.

'The members of the band regret to inform you that the concert has to be cancelled, but the situation in Serbia does not leave them much choice. However, they hope they will perform in Serbia on some other occasion,' it has been stated in the promoters report"