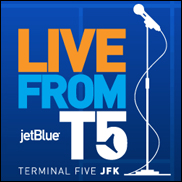 NEW YORK (CelebrityAccess MediaWire) — JetBlue Airways in partnership with Superfly Marketing Group — a division of New York-based Superfly Productions, announced Live from T5, a six-month, 12-date live music concert series at the airline's new Terminal 5 at John F. Kennedy International Airport (JFK). The concert series, which takes place on select Fridays throughout the year, will feature hand-picked emerging artists from around the U.S. as well as bands chosen based on public votes in a national online competition hosted by Ourstage.com .

Through July 22, aspiring artists can upload one original song to www.ourstage.com/go/jetblue for a chance to win one of five acoustic gigs at the JetBlue terminal in New York. Winners will be announced during the first week of August. In addition to a show during Live at T5, the top artist as determined by JetBlue and Superfly will also perform as the opening act for a headlining artist at Bowery Presents' Terminal 5, the popular concert venue in Manhattan's Hell's Kitchen neighborhood, or another Bowery Presents show.

"JetBlue not only provides the most free live entertainment in the skies — we also seek to provide unique entertainment experiences for our customers on the ground in our brand new, state-of-the-art terminal," said Kim Ruvolo, manager brand for JetBlue Airways. "Partnering with an innovative music and lifestyle marketing company like Superfly adds more value for our customers, gives them access to some of the most promising artists in the industry and engages them through the online OurStage.com competition to create a music event for customers, by customers."

"We are thrilled to partner with JetBlue – a brand committed to providing unique customer experiences. With the 'Live from T5' program, we've helped JetBlue elevate itself to a curator of those experiences," said Chad Issaq, vice president of business development for Superfly Marketing Group.

JetBlue's Live from T5 unofficially launched on Friday, May 22 with Austin's own Dan Dyer ( www.myspace.com/dandyer ) performing on the south grandstand in T5's marketplace.

To highlight the many talented artists at JetBlue, the airline has also established an exclusive presence on OurStage.com for its crewmembers to upload their music to be entered into the competition. Fans will vote on the music similar to the national competition and at least one JetBlue crewmember will also be chosen to perform at JFK's Terminal 5. –by CelebrityAccess Staff Writers