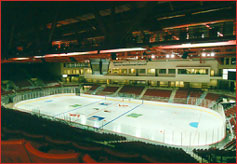 Denver's snow blizzard continues to play out. Saturday morning (March 22) the east
wall of the University of Denver's Magness Arena collapsed from a massive
snowpack sliding off the roof. The collapse forced the cancellation of a state
gymnastics championship, which was just about to get underway, reports the
Denver Post. Everyone got out safely and there were no injuries.

The arena's ceiling and walls appeared to be mostly damaged.

"It appears that when the snow started melting, it loosened a portion of the roof
and when that came loose, with all the weight from the snow on it, it sort of came
down like an avalanche," said DU spokesman Warren Smith, in the paper.

With engineers still inspecting the damage, cost estimates haven't yet been assessed. However, based on initial inspections, the rest of the building looked to be structurally sound, said Smith, who noted repairs would begin right away.