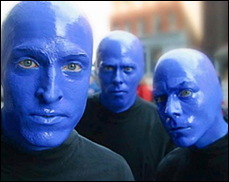 CHICAGO (CelebrityAccess MediaWire) — A California man, Jim Srodon, has lodged suit against the Blue Man Group, alleging that while attending a performance by the group, one of them shoved a camera into his esophagus as part of the performance, the Chicago Sun-Times has reported.

According to the report, the incident took place at an October 8, 2006 performance by the group which took place at the Briar Street Theatre in Chicago. Srodon asserts that during the performance, one of the Blues approached him in the audience with a camera covered with "food and grime" along with the thick blue paint worn by the performers and then without notice and against his will, forced the camera into his mouth.

Srodon claims that he "struggled to free himself" but was restrained while the camera was used to project an image of the inside of his mouth and throat on a large screen as a part of the show, the suit alleged.

Sroden's suit includes Blue Man Productions, The Briar Street Theatre and Fox Beverages, as well as Swell Pictures, and Fox Theatricals, seeking more than 600,000 in damages for battery, negligence and intentional infliction of emotional distress and compensation for the expenses incurred by dental work needed to treat injuries sustained during the encounter.

The Blue Man Group has a different take on the story. In a statement, the group has expressed its shock and dismay at the suit, noting that the "'Esophagus Video' is simply an illusion. A camera is held in an actor's hands, the actor's hands are placed near an audience member's mouth (not on or in). The live-feed video screen then switches to a pre-recorded medical video, resulting in the hilarious and absurd illusion that the audience is peering down an individual's esophagus. Because the camera never enters the mouth, the execution of this illusion could not possibly put anyone at risk of injury." – CelebrityAccess Staff Writers