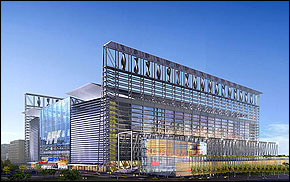 NEW YORK (CelebrityAccess MediaWire) — A group of transit and labor advocates launched a lawsuit against the Metropolitan Transportation Authority this week to stop the sale of development rights over the West Side railyards to the New York Jets for the proposed stadium.

The suit was brought upon by four groups – the Straphangers Campaign, Common Cause, the Transport Workers Union Local 100 and the Tri-State Transportation Campaign – said that a “flawed and unlawful” bidding process unfairly allowed the development rights to be given to the Jets for a low bid of $250 million, a price that the group claims shortchanged commuters, according to the New York Times.

The groups compared the sale price to the MTA’s own appraisal of the 13-acre area at $923 million. The suit accuses the MTA of violating its legal and financial obligation to get the best price for the asset.

A spokesperson for Public Advocate Betsey Gotbaum told the paper that she planned to file a similar suit this week. Two other lawsuits are challenging the stadium on environmental grounds.

These lawsuits have nothing to do with the suits brought upon by Cablevision, a rival bidder for the yards, which owns the nearby Madison Square Garden. –by CelebrityAccess Staff Writers