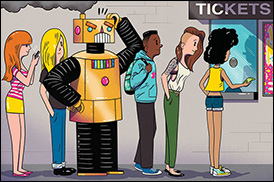 LONDON (Hypebot) – Having choice seats snatched out from under them by the ticket bots of a third party ticket broker is an all-to-common occurrence for a lot of ticket buyers, and while it's been an annoyance for some time, it looks as though something may finally get done about it, at least in Britain.

Has this happened to you? You’re one of the first in line to buy a ticket to a concert by your favorite artist only to find that all the choice seats are already gone, or you go online at the exact second that the sale for the concert opens up only to find that all the good seats are nowhere to be found. Yeah, that’s a drag, and the reason is that the third party ticket brokers are using an automated system of bots to get the best seats before the rest of us have a chance. There’s been lots of talk about doing something about this in the U.S., but not much has come of it, but things might be different in Britain, as the music industry is making an uproar.

Members of Parliament have recently been briefed by a wide array of music industry representatives on how harmful the practice is considered to be, with the primary concern being that the price for good tickets is artificially inflated thanks to the use of the bots. Both artists and managers testified against the practice and voiced their frustration at not being able to do much to stop it unless there was some sort of government intervention.

Wile consumers frequently rail against the huge Ticketmaster as the main offender, the fact of the matter is that the service is a primary ticket-selling website, getting the tickets directly from the promoter and venue. The real culprits are the secondary services that bid up the price for the best seats after their bots buy them at face value.

While artists are said to be implicit in the price add-ons like service charges from Ticketmaster (which enables them to artificially keep the face value of the ticket low while charging more), fans probably wouldn’t mind so much if at least they had a chance at buying a good seat in the first place. The fact of the matter is that once the secondary ticketing agency gets involved, pricing is completely out of the hands of the artist and venue, with the agency charging what the market will bare. Of course, the prices can really skyrocket at that point, and neither the artist nor the venue or promoter is able to benefit, and of course the fan is left paying far more than what he believes to be fair.

Similar hearings have been held in the past with no movement towards a resolution. Perhaps this time things will change, and cause some change in the U.S. as a result as well.