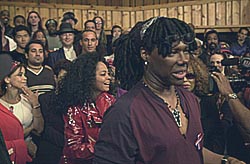 Musicians, entertainers, actors and athletes are coming together to participate in recording a new version of the Nile Rodger's classic "We Are Family," in response to the recent outbreak of racial attacks and intolerance towards Arabs and Muslims since the September 11 terrorist attacks.

Rodgers is producing the recording and music video with Tom Silverman for Tommy Boy Music and SumThing Else Musicworks as co-executive producer; Spike Lee is directing the video and Globalvision's Danny Schechter is producing a documentary about the recording session. A portion of the royalties from the recording will be donated to assist the responsible outreach and educational work of credible, non-political, not for profit organizations that are working in these areas — promoting tolerance, combating misfortune and defending the freedoms of all Americans.