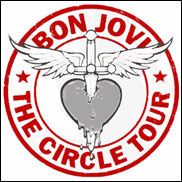 
Isn't this how we got into trouble? Do you really expect fans to overpay forever to hear the same damn songs?


In other words, you need new material that people want to hear or the tickets have to be cheap. You might stop at Quiznos or McDonald's every day, but you only go to Bermuda once every couple of years. Very few people love one vacation destination so much that they go there exclusively, in other words, one year Bermuda, one year Jamaica, one year the Virgin Islands…and then maybe even Hawaii. Then again, who can afford to go on vacation anymore?

Last time around Bon Jovi didn't sell out, and blew out and gave away tickets. What in hell makes the band think business will be better next year? What are the indicators? When a product fades in the marketplace, the only way to juice sales is to reboot, refresh… Instead, we get Bon Jovi doing "Wanted Dead Or Alive" and "Livin' On A Prayer" one more time.


I guess they could always do albums.


Then again, after "Slippery When Wet", then..?


If you're a major act going out next year for a big ticket price, you'd better reevaluate.


First you can drop the price. Dylan doesn't charge much. If it's about your greed, needing to make money to keep up your payments, you're in trouble. It's got to be about the music.


And since you are a musician, you've got to do a different show.


What if Bon Jovi went out acoustic. Every number with wooden instruments as CSN&Y used to say. Maybe the venues would be smaller, but people would overpay for this, it'd be a special event.

I'm not even sure social networking can goose the same show anymore. People have seen this. Win a contest to get on stage, write a song to open up the gig… That's so 2010, and soon it's gonna be 2011.


Cut the hubris. 2011 is the year to do something different, or stay home.


If you don't, be ready to be victimized by the Web. Yup, that's what happens. You can no longer give away tickets quietly, if there are empty seats people snap pictures and put them online DURING the show. As a result, demand is driven down for future dates.


It's tough being a star.


But things are good if you're a musician.


Do people really want to overpay to see Steely Dan one more time? Donald Fagen is better off building the Dukes Of September, at least it's new, it's vibrant, it's not cast in amber like the shows of too many overpriced acts living on their laurels.