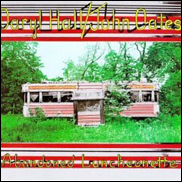 The eighties hits were the comeback.

I’m sick of the rewriting of history. The fiction that Hall & Oates have to be plucked from the

trash bin of history, that this is a reclamation project, that we finally have to admit Hall &

Oates were cool. They were cool from the very BEGINNING!

They signed with Atlantic Records, run by Ahmet Ertegun, the coolest dude in the business. They

even made an album with the ultra-cool legend, Todd Rundgren. But they couldn’t score a hit.

And they shuttled off to RCA, where they single-handedly resurrected the worst label in the

business. That’s like winning the Preakness on Mr. Ed. THEN, after breaking through big time,

they fell back to the bottom, went back to clubs when most people would give up, climbed back

people say they were CHEESY, but we have to admit they made good music? HORSESHIT!

The midseventies were a heyday of radio. L.A. had five rock stations. And I’ll never forget

exiting the law school parking lot when this one track came out of the speakers.

You’re a rich girl, and you’ve gone too far

This was "Fun, Fun, Fun" one step removed. An update of Brian Wilson’s classic track, ONLY

BETTER! The girl was no longer in a T-Bird, she was driving a Benz, shopping on Rodeo Drive, we

knew exactly who she was, and we couldn’t stop singing about her.

The track had no intro, no set-up. Daryl Hall immediately started singing. Almost a cappella.

Then, a guitar flew in like Telstar, a Philly soul band emerged and we were OFF TO THE RACES!

If horse races were run on roller coaster tracks. The strings swooped in and out, hands clapped

and conductor Daryl Hall lorded over the whole concoction. Done in less than two and a half

minutes, you pushed buttons incessantly in the hope of hearing it again. Shit, I bought the

album AND I DIDN’T EVEN HAVE A STEREO!

"Bigger Than Both Of Us" is a classic. Listen to "Crazy Eyes" and the late night burner, "Do

What You Want, Be What You Are", with its Earth Shoes reference, but marvel at "Rich Girl", the

legendary single. Hacks listen to the radio and try to replicate what they hear. Geniuses come

up with something brand new, something we’ve never heard before, but immediately gravitate to

when we hear it. Shit, "gravitate" doesn’t connote the essence, that we LOVE FROM THE VERY

FIRST TAKE AND CAN NEVER BURN OUT ON.

Hall & Oates didn’t play it safe. They expanded upon their rock and soul premise…and no one

cared, even though "Beauty On A Back Street" was released only a year later. The only flaw of

the album opening "Don’t Change" is it’s more rock than soul, radio didn’t know what to do with

it. But listeners, the few who bought the album, were ENRAPTURED! But my absolute favorite cut

was deep on side two, "Winged Bull". More like Alice In Chains’ "Rooster" than anything cut in

Memphis or Philadelphia. At some point in the future, my generation is going to die, will all

these magnificent album tracks evaporate from consciousness too? If I had a radio show, I’d

play "Winged Bull" and you’d say WHAT THE FUCK IS THIS? Majestic, piercing, all with Daryl

Hall’s pure voice atop. He wasn’t whored out to his soul success, he still had his rock roots.

Maybe that’s why the system was so confused. You had to be one thing or the other.

ALONG THE RED LEDGE

Album after album, no hits, no one cared. I went to see the band at the Roxy. Previously they’d

played the Universal Amphitheatre. It was like seeing Willie Shoemaker give riding lessons to

your next door neighbor. Give it up, get a day job, this is just too creepy.

But musicians can’t give up.

And stunningly, Hall & Oates CAME BACK!

To tell you the truth, I thought covering "You’ve Lost That Lovin’ Feelin’" was pretty

desperate. That’s what you do when you’ve run out of options, are ruled by frustration, cut a

say that I gave the album a good spin. Just another stiff by a band I loved so much once that

could no longer get traction. Then, long after I’d given up on the record, when I’d probably

bought twenty more by other artists, this keyboard started exploding out of the radio.

YOU MAKE MY DREAMS

What I want you’ve got

This was not sold by a glitzy video. With a chick with big tits. This was a RADIO RECORD!

Remember those? You’d hear them and stare at the dial, stunned that something so exquisite

could come over the airwaves.

Hall & Oates did "You Make My Dreams" last night at the Troubadour. I was up jitterbugging,

like I’d digested Mexican jumping beans, I couldn’t help myself. That’s how the great eighties

Hall & Oates hits are. They infect you, make you jump up and PARTICIPATE! Make you believe

there’s nothing better than being alive, that you must SURF THE ZEITGEIST!

Hall & Oates lost their label deal long ago. Bands like this feel forgotten. When you see them

live, they’re going through the motions, selling nostalgia, pissed that they’re not who they

once were. But not Hall & Oates. They showed up with eight pieces, including the duo. They were

as well-rehearsed as a traveling jazz band of the forties. But better yet, THEY WERE ENJOYING

This was not the Police, not Genesis, doing it for the money. I’m not even sure the show was

for the fans. Daryl Hall was having so much fun, it was INFECTIOUS! Shit, he was having MORE

And, even though 62, his voice was fully intact. Oates was doing the "oohs", playing the

guitar, and the music that emerged was VITAL!

They played numbers off "Abandoned Luncheonette". They came back for two encores. And, if they

hadn’t turned on the houselights and cranked the background music, the audience would have

This track was in the can, on the racks, for YEARS before it was a hit. I’m sure Hall & Oates

were frustrated. But if you’re dedicated, if music is your calling, you don’t give up. Even if

the radio is dominated by melisma floating over rhythm. Mariah’s spouting her inanities, but

like old jazz musicians, Hall & Oates have not given up. They don’t have the rep, the history

of the Stones, but they’re not letting it get them down. Because it’s about the music more than

the success, the sound more than the dollars. And you hear this, you FEEL IT when you see them

Sure, you can go to the show and relive your MTV memories. And there are plenty of them…enough

to make sure Daryl Hall never has to get a day job. But that’s just icing on the cake. This duo

has a thirty five year catalog, a body of work. You’re not seeing stars, you’re watching

Where did this come from? Who even knew Mike Oldfield wrote more than "Tubular Bells"? What

possessed them to cut a cover, once they were fully back, when they were on a roll?

We’re all part of the family. Not those buying an occasional track on iTunes. But those who

need this music, devour our albums. When we hear these tracks, a string is drawn, our lives can

be seen as a continuum, our histories make sense.

We’re part of the family of music. Started sometime around the Beatles and died sometime after

Hall & Oates stopped having hits. That MTV success was just the cherry on top, for not only

Hall & Oates, but Steve Winwood, ZZ Top, all those other acts that had been in the game for

eons. Their greatness could finally be SEEN, by ALL! But then it only became about how you

looked. The music was not about experimentation, rather safety. We ended up scratching our

heads…where did our music go?

We’d go to the stadium show, we’d see our memories, but not feel them. Mick Jagger was not

really on stage, but at the bank, counting his dollars. The vitality was absent.

The vitality was in full force last night. It was palpable. We’re gonna get older, eventually

we’re gonna die, but we’re gonna be able to listen to our music until we pass to the other

side. It may be static on wax, even MP3, but it positively breathes on stage. When those

playing it stop treating it as dead, but as a vessel they can blow life into. The songs were

not new, but last night was not an oldies show, the players, the music, WE WERE TOTALLY ALIVE!