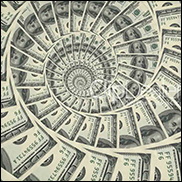 It's about the money.

It started in the nineties.

Or maybe we've got to go back to the eighties for perspective.

The music business was in the dumper, disco killed corporate rock, and then a deejay in Chicago blew up dance records and revenue cratered. But at the deepest, darkest hour MTV came along to save the day.

And suddenly, along with the new technology known as the CD, record companies were rolling in dough. And when there's that much cash involved, you don't hand the wheel to someone who just got their license, you only let the experienced drive, and

old men solidified their hold on the business and ironically they're still running it today, I mean you Doug Morris and Marty Bandier, and the acts have been supplanted by the execs, they're the ones who not only make all the money, but have all the power. Dr. Dre may be worth almost a billion, but as talented as he is he's got to credit Jimmy Iovine, who shepherded Beats to Apple, another moribund company run by the clueless.

Used to be different, that's what the classic rock revolution delivered, creative control, you cut the album in the studio of your choice and the label had no input, under contract they had to release it as is. Today they don't, and they'll make you work with a co-writer, cut the same damn track over and over again, and the so-called "artists" agree to it!

Why? Because they want to get rich. And they're too uneducated to take another path.

Mark Zuckerberg famously refused to relinquish control of Facebook to adults, he wanted to steer, he needed no supervision. Who are the twentysomethings running the music business? Don't say Scooter Braun, who took Wall Street money he could never pray to repay and has foisted the fake known as Justin Bieber upon us.

Justin's no different from what came before the Beatles. A pretty face who could sing. And since the audience has developing hormones, and knows no better, they embrace him. And want to be him. And everybody's on social media promoting themselves in the desire of being discovered, while those who truly change the world are going to school and studying engineering in their bedrooms. Nerds and outliers ultimately triumph, they're the only ones with the balls to do it differently. And eventually it'll be done differently in America when we all burn out on the pabulum being fed us and admit although hooky today's music has got the nutritional value of a Slurpee.

I mean what kind of fucked up world do we live in where the biggest star in America makes her bones speaking the truth, unveiling her teen warts in country music, and then hooks up with the songwriter/producer du jour to make music that sounds just like the rest of the crap on Top Forty. Sure, it sells. And that's now the only criterion that counts, if you're rich, if you make a lot of money, if you control the chart, you matter, we bow at your feet, if you don't, you're irrelevant. Take the road less traveled? Most people think there's only one road to go on!

But so many are disaffected with no future, with little upward mobility. That's what's turned the Presidential campaign topsy-turvy. But when it comes to art, we lionize the latest Max Martin record and J.J. Abrams's remake of "Star Wars." Hell, even George Lucas was pissed, wishing J.J. had pushed the envelope. George had to apologize for that, because we live in a fascist country where it's all groupthink all the time and if you say something negative, if you go against the grain, you're a pariah.

But that's what all the hit acts of yore did, challenge precepts, make us uncomfortable.

We've got a cultural problem, caused by money. As long as it's hard to make a good living, the educated middle class, or what's left of it, won't risk a future in the arts, they play it safe. Hell, when I graduated from college I was a ski bum, nobody I knew went to a job interview, but today if you don't start your career right after you get your diploma you've already been left behind!

And the parents reinforce the paradigm. Thinking going to college is all about getting a job as opposed to opening one's mind. Hell, most people's minds are closed, to truth, to insight, to anything that contradicts what they've been told previously. And isn't it interesting that the artists of yore were the leaders, who got us to smoke dope, question authority and end the Vietnam War while we were at it.

So I could tell you about a few hit records, champion the underdog and extol the virtues of those who've succeeded. But the truth is we all feel the malaise, the seamy underside, the feeling that what once was is here no longer. Hell, didn't David Bowie say if he started today he'd be in tech?

And as powerful as tech is, it's not art. Tech needs to be seamless, art has rough edges, it challenges us, it doesn't give us what we want, but what we need.

This can't go on forever. A revolution is gonna come. But it won't be led by wet behind the ears kids who can sing but can't write because they haven't had enough education, never mind enough experience, to have something to say.

And that something is gonna have to be the truth.

And although I don't agree with all the causes of the situation delineated in the above article, I must chuckle at the juxtaposition of Grace Slick and Beyonce. Grace was an upper middle class woman who had no problem challenging authority, she was all about exposing bad behavior, while behaving badly herself, whereas Beyonce is in bed with corporations like Pepsi, which makes people fat and sick, while being thin and squeaky clean herself. Isn't it funny that millennials have abandoned soft drinks, but the acts endorsing this crap believe their audience will suck it up.

Or they just want the check.

But the end result is there's no trust, there's no believability. When questioned, acts just say they're doing what it takes to get by, to feed their family.

Is that what Van Gogh said? John Lennon? Other than mercurial Gene Simmons, who owes what success he has to uber producer Bob Ezrin, responsible for Pink Floyd's "The Wall" and Peter Gabriel's solo debut, none of the hit acts of yore paid penance to the man or the money. They prayed to a higher power.

When are we gonna pray to a higher power again?