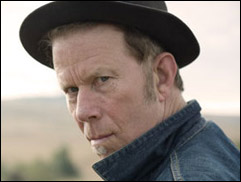 PARIS, France (CelebrityAccess) — American musician Tom Waits has taken a French avant-garde circus star to court over the alleged appropriation of Waits' stage character and the use of his music.

The dispute sounds like something that could have sprung forth from one of Waits more visceral songs. According to the Guardian, Bartabas the Furious and his “equestrian operatic ballet”, On Achève Bien les Anges (They Shoot Angels, Don’t They?) is a mix of dance, circus and theatre using horses and actors that uses sixteen songs Waits wrote with his wife Kathleen Brennan.

Waits claims that they are the “the narrative heart and soul” of the musical drama, and that Bartabas (real name Clément Marty) impersonates him while onstage and is seeking €500,000 in compensation.

“What I say yes to and what I say no to creates the shape of how I am perceived,” Waits said in a court filing. “What I mean to my audience cannot be made separate from the music. It is absorbed into the songs and together they go into the ear of the listener.

“Honestly, France is the last country I ever expected to encounter this situation: they have a minister of culture for Chrissakes!; moral rights and a strong commitment to honor, support and defend artists.”

According to the Guardian, Bartabas claims he approached Waits's agent for permission to use the music and that he's already paid a fee of €400,000 to license the music

“It is clear that I would not have created this show in the same way if he had said he did not agree with the use of his songs,” Bartabas told The Guardian.

Waits has already brought Bartabas to court previously last month when they launched an unsuccessful bid in a French court to block the show.

Despite the setback, they seem determined. “These songs were not found like driftwood on the beach: they came from good families,” Waits said in the new court filing. “The songs have value; my name and image have value; my voice has value. This value is cultural, artistic, and personal as well as economic. Often, things that are rare (or even medium rare) are more valuable.

“I turn down all commercial product endorsement offers and rarely collaborate or lend my name or work to other endeavors. It is my choice to get paid or not to get paid. And that value has been taken and exploited for the profit and promotion of Bartabas’s career and for his religious and political ideology, which neither the songs nor I chose to express. In short, it violates the integrity of my work.” – Staff Writers