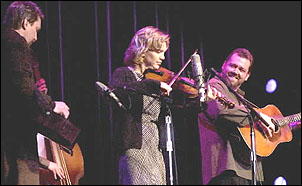 Jessica Andrews to Tour With McGraw

In June, a much better known Andrews will be touring with Hill's country music superstar husband.

Tim McGraw is keeping concerts to a minimum while he works on a new album and helps tend to a new daughter at home. But he added a handful of tour dates and asked Andrews to join him.

"It's awesome," the 18-year-old told The Associated Press by telephone from Nashville on Wednesday.

"We're managed by the same company, so it was, 'Hey, why don't you get Jessica to do some dates?' and Tim was really cool about it. I'm very excited to be doing it with him. I wouldn't want to be doing anything else this summer."

She'll open for McGraw but may sing with him on a song or two if they can work in the rehearsal time.

Andrews' album "Who I Am" went gold three weeks after its release. The title song was her first No. 1 country hit.

Smuckers To Sponsor Stars On Ice

America's premier figure skating production, has partnered with Smucker's as title sponsor for its 2002/2003 US touring season.

Soon to enter its 17th consecutive year of touring the United States, the multi-million dollar Stars on Ice production combines a cast of the most versatile and exceptional figure skating stars in the world with state-of-the-art lighting and sound technology, cutting edge costume designs, progressively innovative staging and choreography, and a mix of American standards to the most contemporary tunes in all genres of today's music. No stranger to Stars on Ice, Smucker's served as "presenting" sponsor for the show between its 1996/1997, 1997/1998, and 1998/1999 seasons.

Conceived in 1986 by Olympic Champion and skating icon Scott Hamilton, and Robert D. Kain of IMG, Hamilton also co-produced and co-headlined the show each season until his farewell tour during 2001/2002. Still a co-producer of Stars on Ice, Hamilton remarked, "No sponsor ever treated us better than Smucker's, in that Smucker's always tried harder to make the tour beneficial to their business while also building a rapport with the show and its stars. I am honored that Smucker's has returned to the Stars on Ice family because we already know the type of partner they are and will be."

The 2002/2003 Smucker's Stars on Ice season will, once again, feature Tara Lipinski, Kurt Browning, Todd Eldredge and Jenni Meno & Todd Sand. In addition, the production will also feature some of skating's newest and brightest stars from the Salt Lake Olympic Games.

will reunite with Yes for its upcoming tour. The Yes office in Los Angeles told Assist News that Wakeman will be joining the group for rehearsals in a few weeks and will participate in a Yes concert tour set for this summer. Plans are being made to expand the tour from its original dates to possibly include some international touring in 2003. Although there are no plans for a studio album, several of the concert dates may be taped for future release on DVD.