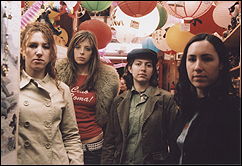 Upon seeing their sign that read “Bassist, Singer, Guitarist, Drummer – The Girls Play Really Well,” a play on the lyrics of the U2 song “Vertigo,” Bono pulled the young L.A.-based band on stage to perform a song. They performed “Out of Control” from U2’s Boy album on U2’s instruments, garnering a standing ovation from the packed arena and plenty of interest from record execs from Atlantic, Sony BMG and Columbia Records who happened to be at the show, according to the Los Angeles Times.

“It’s been unbelievable, it was just magic,” 24-year-old drummer Pam Bluestein told the paper. “It was like a dream.”

“Being up there was like the eye of a hurricane, the energy and sound are amazing,” said 25-year-old bassist Susan Hamilton. “I’m still shaking. I think we impressed U2 too. They were waiting around to see if we could do it, and you could tell they were surprised, I think. Luckily, we rocked it.”

Exit began as a U2 tribute band five years ago, but have since ventured into their own material, which can be heard at www.exit-band.com.

Fligg told the paper it would be hard for the young band to match the music moment they had with U2, but she did learn that arena crowds are more exciting than intimidating. “To get a taste of that, what it’s like, that’s what every band wants.” –by CelebrityAccess Staff Writers