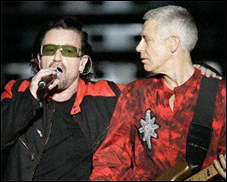 SYDNEY (CelebrityAccess MediaWire) – According to The Sydney Morning Herald Sydney might have embraced U2 with open arms on the weekend, but that caress turned sour for some disgruntled fans on Friday night.

Some fans that purchased prime tickets at $203.50 each were infuriated to find themselves seated behind turrets of sound equipment and a merchandising tent on Friday night at Telstra Stadium.

Allyson Henry, from Kensington, and her friends purchased some of the affected tickets. "We queued up overnight late last year when the tickets first came out," Ms Henry said. "The seats looked clear on the plan, there was no obstruction and we clarified that with Ticketek. Then we rocked up excited like teenagers, and whammo, we have merchandise and sound equipment in front of us," the Herald reported.

The group bought tickets totaling $1,200 and had asked Ticketek for a partial refund so they only paid the same as audience members with obstructed viewpoints.

"I might as well watch it on DVD," Ms Henry said. "You're all done up, and you've done everything you can to make it a good night, and really ruins the evening. I think it was really avoidable."

Her sister Katie estimated at least 100 people had their views obstructed.

The Herald reported that a spokeswoman from Ticketek said U2's promoters, Michael Coppel Presents, had altered the stage plan and only informed them of the change on Thursday.

"U2 made last minute changes to their set," she said. "Areas we had locked off as restricted viewing were changed … It was out of our control, it was a bit of a surprise [for fans] on the night."

The spokeswoman said the staff had offered to move fans in the area to a contingency seating area, but most had declined.

Henry denied they had been offered relocated seats. Instead, five songs into the concert the frustrated group shifted themselves into another section.

Ticketing manager Roger Field from Michael Coppel Presents denied the stage configuration was changed and said only a small number of seats were affected.

"Because of placement on track and grass for the mix position and because weather affects the roof on mix, the mix position can shift between 10 to 12 degrees in each venue," Mr. Field said.

"Any patron who raised the issue with staff, would have been taken care of," Mr. Field said. "Had any patron still been unsatisfied we would have offered a full refund prior to viewing the performance, but no such request has ever been received."

He said all issues raised were addressed on the night, but requested disgruntled fans contact the promoter directly. Michael Coppel Presents is online at http://www.coppel.com.au