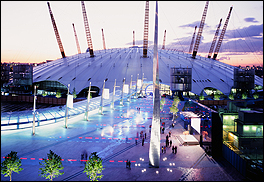 LONDON (CelebrityAccess MediaWire) — When tickets for the Spice Girls’ December concert at The O2 Arena in London went
on sale, all 20,000 were snapped up in 38 seconds. Each and every one of the concertgoers
will be counted in and out of The O2 by video analytics software from Ipsotek.

The O2, owned and operated by AEG Europe, has installed Ipsotek’s people-counting
system across dedicated cameras at its main entrances so that AEG’s management and
tenants has hour-by-hour, day-by-day analysis. Ipsotek’s software was chosen for its
ability to provide an accurate, automated headcount covering both steady streams of
visitors and sudden influxes during high-profile events.

Tim Rawlins, Operations Director at The O2, said: “We were impressed that Ipsotek
could cover multiple entrances with a high degree of accuracy. Naturally our principal
reasons for wanting to know how many people are within The O2 concern health,
safety and staffing levels, but as London’s major entertainment destination we also
need to measure footfall for our tenants.”

He continued: “Data is freely available to the operations room and Ipsotek has set up
trigger points on visitor numbers so that we receive emails at certain threshold figures
and when we are approaching maximum occupancy.

“We are able to export figures in convenient formats – including spreadsheets, graphs
and pie charts – to a range of business customers who may want templates that tell
them about footfall during particular periods. The Ipsotek interface could not be easier
to use and I have running totals available to me 24 hours a day.”

The O2 presented considerable challenges, notably the need to count clusters of people
who might be walking three or more abreast through the same doorway. In addition to
totals, the client needed reports on peaks and troughs at the entrance. Ipsotek’s
combination of software and hardware was one of few offerings able to analyse busy
CCTV images and convert the data into meaningful statistics.

The venue’s management knew there would be bursts of activity in the run-up to a
major concert but a counting system using people mass was not acceptable to them.
They also felt that manual counts would be inaccurate and time-consuming. Cameras
from ADT have been positioned above the entrance points and the system is
networked to provide a count for individual or combined doors.

Chris Gomersall, CEO of Ipsotek, said: “Few, if any, commercially available systems
possess either the advanced analytics or the processing power to cope with the
demanding conditions at The O2. We are delighted to have such an iconic London
landmark on our client list. ”

The site is a multi-attraction venue that features a 20,000 capacity arena, The O2
Bubble, a state of the art exhibition space and the host of the critically-acclaimed
Tutankhamun and The Golden Age of the Pharaohs exhibition, IndigO2, a smaller live
music venue, an 11-screen Vue cinema and over 25 bars and restaurants. The opening
season of The O2 included appearances from some of the very best world-class
performers including Bon Jovi, Justin Timberlake, Barbara Streisand, a recordbreaking
21 nights of Prince, The Rolling Stones and Elton John. The overall capacity
of The O2 is in excess of 50,000. –by CelebrityAccess Staff Writers