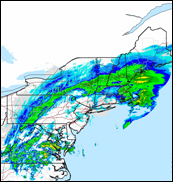 (CelebrityAccess MediaWire) — A major winter storm has hit the east coast of the United States, leaving hundreds of thousands without power bringing more than a foot of snow and ice to some places. Needless to say, a number of concerts have been canceled in the wake of the storm and we've attempted to collect a list of affected events.

The Avett Brothers have postponed a show at the JQH Arena in Springfield, Missouri on Friday due to travel conditions. The North Carolina group are unable to make it for the show and will instead play a make-up date on February 24th.

Country star Justin Moore has postponed a Thursday show at the Massmutual Center in Springfield Mass. The show has been rescheduled to Tuesday, April 15.

Luke Bryan postponed a date in Greensboro due to the storm and the show has been pushed back to February 17th.

Laurie Anderson February 15th show at the McCarter Theatre Center in Princeton has also been canceled with a make-up date promised for the future, once the scheduling can be worked out.

Buddy Guy's Feb. 13th show at Atlanta's Symphony Hall has been rescheduled, with his management working to determine a new date.

The Lauryn Hill show planned for Feb. 13 at the Tabernacle in Atlanta has been rescheduled for Monday, Feb. 17th.

If you have any additional concert updates that you'd like to see included in this list, please email news@celebrityaccess.com. – Staff Writers