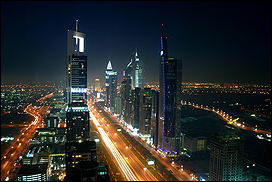 DUBAI (CelebrityAccess MediaWire) — While Live Nation has netted Dubai promoter Mirage, it appears as if AEG's picked up the firm's former GM Thomas Ovesen, considered one of the regions top promoters, to head up AEG's new Dubai office.

According to Billboard, Oversen had been a mover and shaker while at Mirage, making deals to exclusively rep both Beyonce and Kelly Rowland and promoted events with a host of top-shelf artists including Shakira, Aerosmith and Alicia Keys.

Dubai has been earning a reputation as an a-list tour destination. Long considered a backwater, innovative real estate projects, aggressive marketing and massive infusions of wealth into the region have turned the emirate into an increasingly popular tourist destination for the well-heeled.

"Having a presence in that region is very important to us in terms of growth and finance opportunities," AEG Live president and CEO Randy Phillips told Billboard.

By bringing Oversen into the fold, AEG will give themselves a strong player in this rapidly developing market, albeit without the established infrastructure that Mirage would have brought to the table.

Phillips added, "What we do is invest in people. We try to hire the best people. This company was built in investing in individual and giving them the tools and resources to grow the business. In Thomas we saw someone who was ready to leave that Mirage womb and branch out and build his own business." – CelebrityAccess Staff Writers