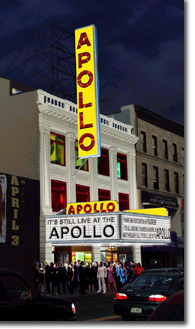 Harlem's Apollo Theater, home of the original Showtime at the Apollo Amateur Night
Showcase, will have a

new venture for the 2002/2003 season of the celebrated, syndicated TV program, "It's
Showtime at The Apollo".
The Apollo Theater Foundation, Inc. has entered into a production deal with de Passe
Entertainment to produce "It's Showtime at The Apollo" for the 2002/2003 season with
The Heritage Network serving as its sales and distribution arm. The new season is
scheduled to begin taping immediately at the historic Apollo Theater.
The partnership with The Heritage Network and de Passe Entertainment is the first of
many such strategic alliances designed to catapult the Apollo to new and dynamic
heights of entertainment excellence, setting the stage for the much-anticipated launch
of an Apollo entertainment franchise, which will include Apollo Television and Apollo
Records.

Suzanne de Passe, chairman and CEO of de Passe Entertainment, is a celebrated
icon in the television and music industries. "I'm extremely excited to return to Harlem
where I was born and raised," she said. "It is indeed an honor to serve as the
executive producer of Showtime at The Apollo." She won her second Emmy award in
1985 as executive producer of the acclaimed television special Motown Returns to The
Apollo. In addition, Ms. de Passe has produced several other award winning television
programs including "Lonesome Dove"; "Sister, Sister"; "The Jacksons: An American
Dream"; "The Temptations"; and "Motown 25: Yesterday, Today, Forever."