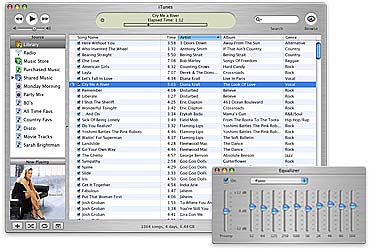 Apple's revolutionary iTunes Music Store sold over one million songs during its first week. Over half of the songs were purchased as albums, dispelling concerns that selling music on a per-track basis will destroy album sales. In addition, over half of the 200,000 songs offered on the iTunes Music Store were purchased at least once, demonstrating the breadth of musical tastes served by Apple's groundbreaking online store. Apple also reported that over one million copies of iTunes 4 have been downloaded, and that it has received orders for over 110,000 new third-generation iPods since their introduction a week ago, with music lovers snapping up more than 20,000 of them from stores in the U.S. this weekend.

"In less than one week we've broken every record and become the largest online music company in the world," said Steve Jobs, Apple's CEO. "Apple has created the first complete solution for the digital music age-you can purchase your favorite music online at the iTunes Music Store, mix your favorite tracks into playlists with iTunes, and take your entire music collection with you everywhere with the super-slim new iPods."

"Hitting one million songs in less than a week was totally unexpected," said Roger Ames, Warner Music Group's chairman and CEO. "Apple has shown music fans, artists and the music industry as a whole that there really is a successful and easy way of legally distributing music over the Internet."

On May 6,the iTunes Music Store will be adding over 3,200 new tracks, including major new album releases such as Jack Johnson's "On and On," Andrea Bocelli's "Tosca" and Fleetwood Mac's "Say You Will," as well as pre-release tracks from upcoming albums by artists David Sanborn, The RH Factor, John Scofield, Jesse Harris and Lizz Wright. Also to be added are additional albums from the Eagles, Michelle Branch's album "The Spirit Room," and new Featured Artist pages for Coldplay, including an exclusive track and music video, and Alanis Morissette, with her catalog of music.

The iTunes Music Store features over 200,000 songs from major music companies including BMG, EMI, Sony Music Entertainment, Universal, and Warner and lets customers quickly find, purchase and download the music they want for just 99 cents per song. The iTunes Music Store offers groundbreaking personal use rights that allow users to burn songs onto an unlimited number of CDs for personal use, listen to songs on an unlimited number of iPods, play songs on up to three Macintosh computers, and use songs in other applications on the Mac, including iPhoto, iMovie and iDVD.