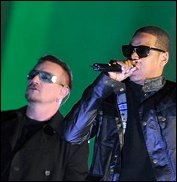 SYDNEY (CelebrityAccess MediaWire) — Jay-Z will be joining U2 on the Australian 360 tour this fall, according to reports by Billboard.

U2's five-city tour will be the first concert promoted by the new Live Nation Australia.

The outing will begin in Auckland's Mount Smart Stadium on November 25 and make its way to amphitheaters across the country, stopping in Melbourne, Brisbane and Sydney. It will conclude at Perth's Subiaco Oval on December 18.

This won't be the first time Jay-Z and U2 have joined forces.

Earlier this year, both acts, as well as Rihanna, performed their benefit song "Stranded (Haiti Mon Amour)" as part of the "Hope for Haiti Now" telethon. In addition to their charity song, Jay-Z and U2 were named as music heavyweights when they made the top 10 on Forbes magazine's list of the world's top-earning musicians.–by CelebrityAccess Staff Writers