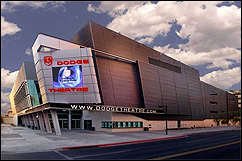 LOS ANGELES (CelebrityAccess MediaWire) — Live Nation has announced that it has entered into a long-term lease agreement to operate, manage and book and the Dodge Theatre in Phoenix, Arizona.

One of the most versatile and modern mid-size music venues in the country, the Dodge theatre marries a classic configuration with modern arena technologies, including moving sidewalls, a capacity that can easily shift from 1,900 to 5,500 seats, and a cutting edge sound system.

“Our decision to sign a long-term lease to operate, manage and book the Dodge fits perfectly with our strategy to expand our mid-size venue reach in the top 25 markets in the United States,” said Bruce Eskowitz, Live Nation’s President and Chief Executive Officer of Global Venues and Alliances, in a statement. “We know what an exceptional venue the Dodge is because we’ve been booking top quality talent into the theatre since its opening. The people of Phoenix can expect a vibrant and even more eclectic roster of musical and comedy acts at the Dodge along with the highest quality customer service in live entertainment.”

The Dodge has hosted hundreds of acts over the past four years, including David Bowie, Coldplay, Josh Groban, Neil Young, Mariah Carey, Kelly Clarkson, Keith Urban and Crosby, Stills and Nash. The theatre is also popular with comedy superstars such as Robin Williams and Dave Chappelle, and recently served as the location for The Blue Collar Comedy Tour, The Movie as well as a George Lopez television special being produced by HBO. –by CelebrityAccess Staff Writers