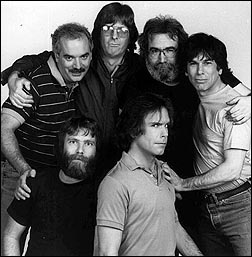 NEW YORK (AP) — The song "Truckin'" is a famous song by the Grateful Dead, but band member Bob Weir cannot sing it without making a mistake, according to biographer Dennis McNally.

"The audience frankly loved those mistakes, because they knew they were in on the secret," McNally said.

McNally's book, "A Long Strange Trip: The Inside History of the Grateful Dead," is in stores now. The story about Weir's trouble with "Truckin'" is just one of the many tales it tells.

McNally also relates how Grateful Dead drummer Bill Kreutzmann got married while a junior in high school. By senior year, he had a wife and a baby at home.

McNally said because Kreutzmann's wife was a year ahead and had already finished school, she was considered an adult, so she'd write notes for her husband to explain his unexcused absences.

McNally also writes about how singer-guitarist Jerry Garcia was missing part of a finger from a boyhood accident. It didn't cause him many problems with the kind of music the Grateful Dead played, McNally said.

"The major way it affected him is he once said to me that if he had a full hand, he probably would have played classical guitar at some point," McNally said. "If you want to play Bach, you need five fingers."

McNally also has an opinion on who was the smartest member of the band: bassist Phil Lesh.

"Phil probably has the highest IQ in the band," McNally said. "He was composing symphonies for four orchestras in his own head, and writing it down. Phil is extremely brilliant."

Garcia, the Grateful Dead's founder and lead singer, died of a heart attack in 1995.

Now playing under the name The Other Ones, the band is planning a 15-show fall tour.