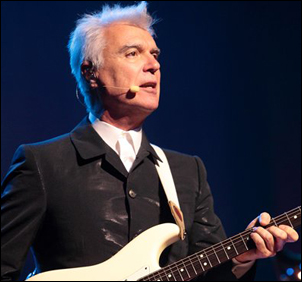 Old fart hates change, what else is new?

So I went to the Mill City Museum. Once upon a time they had sawmills on the Mississippi. Back before they cut down all the Minnesota timber and other states got into the lumber act. But if Luddites like Byrne were in charge, we’d still be sawing timber with water power, got to keep those jobs.

And then came the flour mills. But they disappeared too. Because with the advent of electricity, the mill didn’t have to be on the water.

The only people who don’t get this are the musicians.

What do we know about musicians? They couldn’t work at the 7-11, they wouldn’t be able to show up on time. I liked it better in the old days too, when without the Internet we didn’t know so many of our heroes were doofuses.

But when you start railing against the Internet and Spotify and asking how a musician can get paid, you lose me completely. Hey, why don’t we go back to dial telephones! While we’re at it, why don’t we go back to TALKING on the telephone! At least the providers were hip to this and started making money on data. If Verizon were Byrne it’d be lamenting the loss of landlines, and have us pledging to actually pick up the phone and call our mother and sister and spend at least ten hours a week talking, the same amount of time it’s going to take me to listen to your lame album to the point where you say I will get it.

Why does every industry accept the fact that change is inevitable except entertainment? Especially music. Because it can be made alone for next to nothing and everybody who records believes we should pay attention.

Yup, give up that laptop. Give up iTunes. Let’s go back to the dark ages when you had to have a record deal to record, never mind get distributed. Want that?

As for consumers… You had to buy the album to find out it was terrible. Or purchase a seventy minute CD to hear one good track. But Byrne would say you were keeping the artist alive! I’d say they’re better off dead.

No one above the fray is complaining they can’t get paid. Is Jay-Z bitching? No, he ADAPTED!

I don’t hear Lady Gaga or Katy Perry ranting that they just can’t make it in the new world. Then again, their YouTube videos get millions of plays. Hey David Byrne! No one is holding the audience back! Why don’t your new clips get 10 million views? Could it be that most people are not interested?

Just because you make it that does not mean we’ve got to pay attention.

As for those who don’t get Spotify, you’re completely stupid.

Here’s how it works.

And it only pays when your music gets played. What a concept. So different from selling an album with the aforementioned one good track. And it pays FOREVER! Even into your old age, when they no longer have turntables to play your vinyl records, never mind the software to play your MP3s.

But I could rant forever and Byrne still wouldn’t get it.

But Byrne gets ink because news outlets know the Internet loves a controversy. Fellow Luddites e-mail people like me, pounding their chests, claiming another has-been is on their side!

Or Thom Yorke… Can he really keep his finger in the dike, stopping progress?

You want people to make more money off recorded music? Stop watching YouTube and get everybody to pay for Spotify Premium.

But this isn’t about Spotify. It’s not even about recorded music. It’s about old people who don’t like that the world changes faster than ever. What next, should we bring back MySpace, return to AOL dial-up?

I’m overwhelmed too. I’m trying to figure it out too.

But if you don’t think we’re in a golden age of music access, if you’re not thrilled that the history of recorded music is at everybody’s fingertips and there’s a monetization plan, you’re positively ignorant.