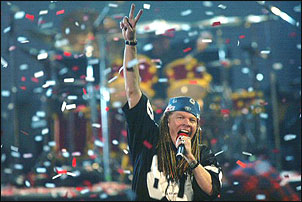 Clear Channel Entertainment has officially pulled the plug on the Guns N' Roses tour. A number of dates on their tour steadily began getting cancelled, following a riot that broke out at their December 6 show in Philadelphia after the group failed to show up.

In a tersely worded statement, Clear Channel confirmed the inevitable:

"The remainder of the Guns N' Roses concert dates promoted by Clear Channel Entertainment have been cancelled. Refunds will be available at point of purchase.

"Clear Channel Entertainment takes pride in bringing live entertainment to the public. We apologize for any inconvenience to all the fans who purchased tickets."

UPDATE: NEW YORK (AP) _ When Guns N' Roses announced they were going on tour this fall after a nine-year hiatus, fans of the heavy metal band snapped up tickets. Axl Rose was back and there was talk of a new album.

But the comeback has been no "Paradise City."

Rose, the mercurial frontman whose disappearing acts have long irritated fans, failed to show up for the opening show Nov. 7 in Vancouver, prompting thousands of ticket holders to riot outside the venue. The band was a no-show again last week in Philadelphia, and fans got unruly.

By then it became apparent that the "Chinese Democracy" tour was finished. On Wednesday, promoter Clear Channel Entertainment made it official: The rest of the tour has been scrapped. Clear Channel didn't offer a reason.

"In a strange way, this tour has been very reflective of pretty much everything that has happened to the band since about 1992," said Chuck Klosterman, a senior writer at Spin magazine.

Led by Rose's screeching vocals and Slash's fiery guitar, Guns N' Roses broke onto the scene in 1987 with the hugely successful "Appetite for Destruction."

Containing the hits "Welcome to the Jungle," "Paradise City" and "Sweet Child O' Mine," the album was filled with rage, paranoia and profanity, and provided a glimpse into the excesses of a band rising through the ranks of Los Angeles' burgeoning metal scene.

But Guns N' Roses was plagued by a series of ugly episodes. Drug and alcohol abuse was rampant, band members had numerous scrapes with the law, and Rose's volatility and eccentricities put a strain on the group.

Still, the band managed to carry over the success of "Appetite" into the 1991 "Use Your Illusion" double set. The album and ensuing world tour enhanced its popularity, but infighting persisted and band members parted ways in the mid-1990s.

All the while, Guns N' Roses followers held out hope for a reunion.

That sort of happened this year, when a new core of band members played a boisterous, surprise finale at the MTV Video Music Awards in August. A new tour was announced; Rose and keyboard player Dizzy Reed were the only holdovers from the "Use Your Illusion" days. (Rose is the lone original member.)

Then, however, came the Vancouver no-show, which a band spokesman blamed on poor weather in Los Angeles that held up Rose's flight. In Philadelphia, a promoter said the cancellation was because of an illness by a band member.

The band also was playing to thin crowds in venues they would have sold out a decade ago, Klosterman said. "They just must be losing money hand over fist," he said.

One bright spot was a Madison Square Garden show earlier this month that won critics' praise and sold out quickly.

Interscope Geffen A&M would not comment on whether a new album is planned.

PHILADELPHIA (AP) — Fans at a sold-out rock show became unruly after the group Guns N' Roses failed to appear, and police were called to the concert arena, officials said.

Witnesses at the First Union Center on Friday night reported angry fans yelling and cursing, some throwing bottles and chairs, and ripping up plants, but a spokesman for the arena operator denied the accounts. Several fights were reported.

A spokesman for the arena operator said officials were called shortly after 11 p.m. Friday and told one member of Guns N' Roses was ill, and that the band would not be able to perform. He said he did not know which member was sick.

Members of the audience, while unhappy, left "in an orderly fashion," he said. He said police were called only as a precaution.

On Nov. 7 in Vancouver, police used pepper spray to disperse thousands of irate fans rampaging outside after a Guns N' Roses concert was canceled because lead singer Axl Rose failed to appear.

An appearance by Bruce Springsteen and the E Street Band warmed thousands of Charlotte residents, who've spent four days without heat and light after an ice storm.

Springsteen, touring for his album "The Rising," brought his show to the Charlotte Coliseum Sunday night, telling a near-sellout crowd he was glad they'd made it despite the recent woes from the storm.

"Thanks for being here with us," he said. "I know most of you want heat and electricity. We appreciate you being here."

As fans cheered for a third encore, Springsteen teased them, joking with guitarist Steve Van Zandt he thought they should send fans home to their cold, dark houses while he and the band returned to their luxury hotel.

Springsteen eventually relented, and he and the band played another two songs, closing with "Santa Claus Is Coming to Town."

The singer is nearing the end of a 46-city tour.

Organizers of the Thomas Point Beach Bluegrass Festival — one of the largest bluegrass festivals on the East Coast — plan to take the year off in 2003.

The festival has taken place each Labor Day weekend for 25 years. Founder Pati Crooker says it's time for her staff to "have a breather."

Bluegrass stars who have performed at the event, which will return in 2004, include Bill Monroe, Alison Krauss, Ricky Skaggs and Del McCoury.

"I always thought I'd stop at 25 years," Crooker said recently. "But it's become a huge part of my life, of everyone's life. So I can't stop it for long."

She started the festival in 1977 as a way to bring families to the park.