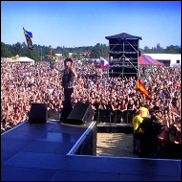 KARLSHAMN , Sweden(VIP-NEWS) — For the ninth year in a row, Sweden Rock Festival, which took place between 3-6 June in Sölvesborg, has beaten all previous audience records.


Last year the festival became the biggest music festival in Sweden’s history with 33.200 visitors but that was beaten yet again with 35.200 hard rock and metal enthusiasts visiting the 2009 event.


Since 2001 the festival has grown from year to year proving that the demand for Hardrock is bigger than ever. This year’s festival line up included: Uriah Heep, Foreignor, In Flames, Heaven & Hell, ZZ Top, Twisted Sister, Johnny Winter, Journey and many more.